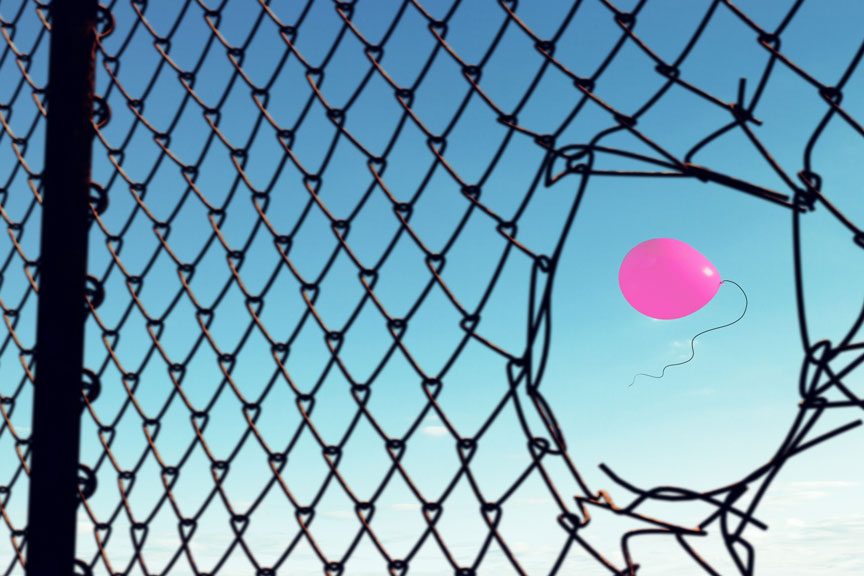 When my oldest daughter was three, I took her shopping with me one day. Our grocery store offers free balloons to kids, which is brilliant, because anything that can keep your preschooler smiling for 15 minutes while you replenish milk and beer supplies is a win-win.

Jayelyn chose a bright pink balloon, which was the color of pretty much everything in our house back then. I tied it to her wrist (because failing to do that is a mistake every parent makes only once) and we proceeded with our shopping.

After we got home, she continued to carry that balloon around the house for a solid hour. When she finally seemed to lose interest, I said, “Hey sweetie, why don’t we take your balloon outside and let it go? We can watch it float all the way up to the clouds.”

“Yeah!” she said, immediately excited. Then I told her the story of when I was a kid and did the same thing, watching my balloon go up, up, up until it was so small in the sky I couldn’t even see it anymore. So out in the backyard we went.

“OK, let it go!” I prompted, and she did. Then, as soon as the ribbon left her hand, a shocked look came over her face. She started to sob. Uh-oh.

“What’s wrong, honey?” I asked, both amused and mentally kicking myself at the same time.

I hugged her and we went back inside. Soon she was focused on something else and the lost balloon was forgotten. But what I hadn’t anticipated about this scenario was that, in her little mind, releasing the balloon wasn’t a permanent decision. She believed she would be able to both let go of the balloon and keep it at the same time.

Isn’t that the way we all think? Not about balloons, but about the things that we keep tied to us at all times. The unhealthy habits and patterns that weigh us down and prevent growth. We know we should let go of them, but somehow we stubbornly hang on, in spite of ourselves.

As I worked to adopted mindfulness and meditation practices over the past couple of years, it became increasingly clear to me that a bunch of pesky habits were slowing me down and keeping me unhappy. So I’ve been letting them go. Here’s my list…

1) The news (both reading and watching).

Leading up to the 2012 presidential election, I began to notice how stressed and anxious I was becoming. I was spending so much time absorbing news and political commentary that I had developed a very cynical view of our world and future. Cable news especially is guilty of creating an echo chamber that does nothing but repeat predictions of doom and gloom.

When I finally realized this, I decided to experiment with not paying attention to the news for a week. Then that week turned into a month. It soon became clear that if there was something worth knowing about, I would hear about it from friends or coworkers. By letting go of news coverage, I could also release the anxiety it generated.

Four years later, I’m still ignoring the news. Call it blissfully ignorant if you want, but I’m much happier for it.

Kids growing up in America (especially boys) get a very clear message that the way to succeed in the world is to work hard, compete and fight for your ideas. While there’s certainly value in hard work, I’ve begun to realize that the notion of “fighting” for success is outdated and counterproductive.

It turned out that so much of my ego was tied up in being “right” that I was missing lots of opportunities for growth. New relationships and new ideas only come when you are open to what others have to offer. Now that I realize that, I can put aside ideas of right and wrong, and look for ways to connect with others.

Whether we’re conscious of it or not, we’re fed daily messages that happiness is only a purchase away. And we often fall for it, because marketers know exactly how to capitalize on our emotions (trust me on that, I’m a marketer). And maybe that purchase does make us happy…for a little while. The problem is that, to keep that feeling going, we must keep accumulating more and more stuff. If we don’t get a handle on this behavior, we either end up deep in debt or on an episode of Hoarders.

I don’t want either of those things to happen to me — and I want my daughters to learn good spending habits — so I’ve changed the way I think about purchases. This is where mindfulness becomes a valuable tool. Instead of buying something I think I want, I now pay attention to the feeling I’m having. What feeling am I trying to numb by buying that thing? Frequently, it’s anxiety, self-criticism or just plain boredom. Once I see what the real problem is, I can focus on dealing with that emotion, rather than buying something that won’t lead to real happiness.

There’s a part of me that still feels like a kid in elementary school. When I do something I feel is worthwhile, I want to be recognized for it. Some call this the ego, but I prefer to think of it as my false self, because it frequently leads me in the wrong direction. For example, right now it’s saying, “What if no one reads this article? Or what if they do, and no one likes it?”

Thoughts like this are distracting and dangerous. Speaking of elementary school, when I won the fourth grade spelling bee, my teacher praised me in front of my whole class. That felt great. When I later came in third in the overall school spelling bee, no one said a thing. Ouch.

The problem with desiring acceptance and approval is that I’m allowing someone else to be responsible for my happiness. Instead of looking to others to validate me, I now look inward and recognize the childish, repetitive voice of my false self. This awareness has allowed me to quiet that voice and value myself more, regardless of the messages I get from others.

This is a tough one, and I’m still working on it. When I was growing up, my dad often used anger to keep me in line. I was always fearful I would accidentally set him off, so I carefully tiptoed around him, trying to meet his expectations without getting too close. My dad had his own struggles and I think he was doing the best he could. But I don’t think he realized the degree to which anger is toxic to relationships and self-worth.

I now recognize that I’ve inherited — or, more accurately, absorbed — my dad’s tendency toward anger. When things don’t go as planned, I often feel a sudden, automatic rush of anger. It’s involuntary and instinctive, and I couldn’t prevent it if I tried. But while I can’t control my body’s physical response, I can control my reaction to that feeling.

Did you know that the chemical changes that occur in your brain when you feel a surge of anger will, if allowed, completely run their course in about 90 seconds? When you get angry, your body will quickly adopt a natural fight/flight response, which will fade away as soon as the chemicals leave your bloodstream (again, only 90 seconds). If you find you can’t relax after becoming angry, it’s because you have chosen (probably unconsciously) to keep thinking about this issue that’s angering you, and you’re simply replaying a looping thought that feeds the anger. This only makes it worse.

Mindfulness was the solution to break this pattern for me. Now when I become angry, I quickly identify the feeling, recognize that it’s a natural and involuntary response, and I wait for it to fade away. This isn’t always easy, especially as a parent. Sometimes I have to take a few deep breaths as well. But breaking the link between the emotion and my reaction to it has allowed me, and those around me, to be calmer and happier. I’ve also noticed that the feelings of anger are less frequent and intense than they used to be. I have meditation to thank for that.

Jayelyn, who’s now age 10 and a champion for environmentalism, would be quick to point out that releasing balloons into the air is not good for the earth. Releasing negative habits, however, has been good for me and every relationship I have. It was unsettling at first to change parts of myself that had become so familiar. But now that I recognize the new freedom it brings, I can’t imagine ever going back.

And I’ll always be grateful to my little girl for teaching me a life lesson with her pink balloon.