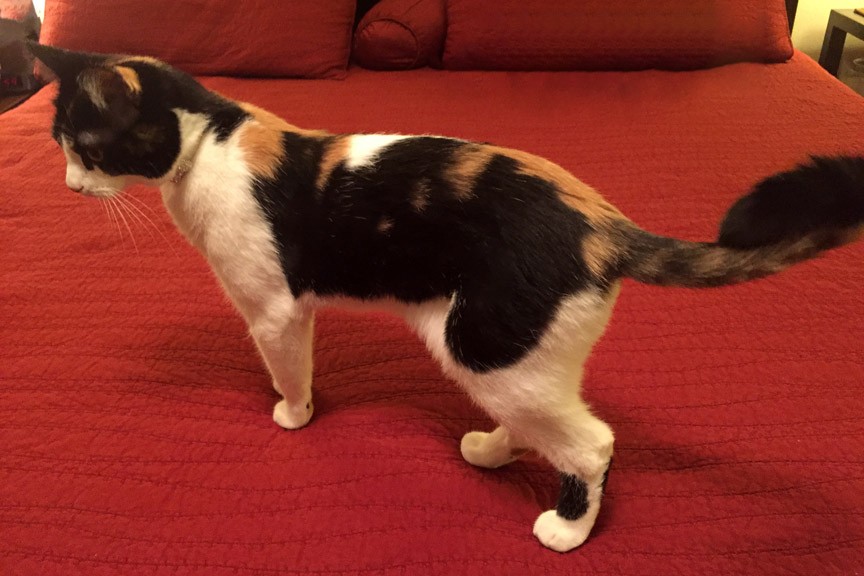 This is Callie. She’s a four-year-old calico cat. She belonged to my mom, but then my mom died and now she lives with me and my two daughters.

I was not super excited about inheriting a cat. I like cats, but I’ve been without a pet for about five years now and it’s been kind of nice. They say people with pets live up to 10 years longer, but those people also have to clean up a lot of poop and hair. So even though my girls occasionally would beg for an animal (“Please, Daddy, just a hamster?”), I kind of enjoyed being pet-free.

When we decided Callie was going to live with us, I was a little worried about how this situation would play out. Callie is a skittish cat. When I visited my mom, Callie would always hide in the closet, never letting me or the girls get near her. She’d peek out of my mom’s bedroom and then disappear into hiding as soon as someone made a move toward her.

After my mom passed away, it was time to pick up Callie and make the 200-mile trip from her apartment to our house. It took quite a while to get her into the pet carrier, and then she cried the entire three hours to my house. Normally this would have been a two-hour trip, but in the stress of getting Callie into the car I forgot my computer bag and had to drive back after 30 minutes on the road. It was not a fun trip for either of us.

Making a new home for Callie

At home I had made a “safe zone” for her in the laundry room where she could slowly adjust to her new surroundings. Even so, she hid behind the washing machine for the next 10 days. Her food was slowly disappearing, though, so I took that as a sign she would not starve to death and that our laundry routine could eventually get back to normal.

After two weeks, Callie finally began venturing out of the laundry room in the middle of the night. I knew this because items that had formerly been on counters and tables were now on the floor. We would occasionally see her sneak out into the family room during daylight hours but she would immediately scurry back behind the washer as soon as someone looked at her.

Finally during Week 3 she took to hiding out under my youngest daughter’s bed. It has a skirt around it so I think it made her feel safe. The girls were relentless in trying to coax her out and eventually she allowed them to put her on the bed. This is when she started crawling under their comforters to sleep. We discovered that if she had something warm and soft over her, she would sit still and allow us to pet her. She spent most of her days sleeping under their bed covers, which the girls loved, but would still only venture out to eat and explore at night.

We thought it was encouraging that she was slowly exploring the house in the quiet of the night — that is, until the midnight serenading began. Around 2:00am every morning she would wander up and down the hallway crying. When we tried to coax her back into a bedroom, she would bolt back into the laundry room.

Then after about two months, her shedding got completely out of control. She was letting the girls handle her more but as soon as they’d touch her, huge clouds of cat hair would swirl up into the air. Just cuddling with her left our clothes completely covered with hair. Hmm…did she have some sort of skin condition? Off to the vet and groomer we went. That was fun. She apparently had bad memories of the cat carrier and as soon as I headed toward it with her in my arms, she clamped her kitty fangs into the base of my thumb (yes, there will be a scar).

Ugh. What to do with this fur-generating, sleep-disturbing, blood-drawing, antisocial animal? The vet said stress was likely causing the shedding and hiding, and we should give it time. How much time? He had no idea but he happily sold me some expensive food additives that might help. 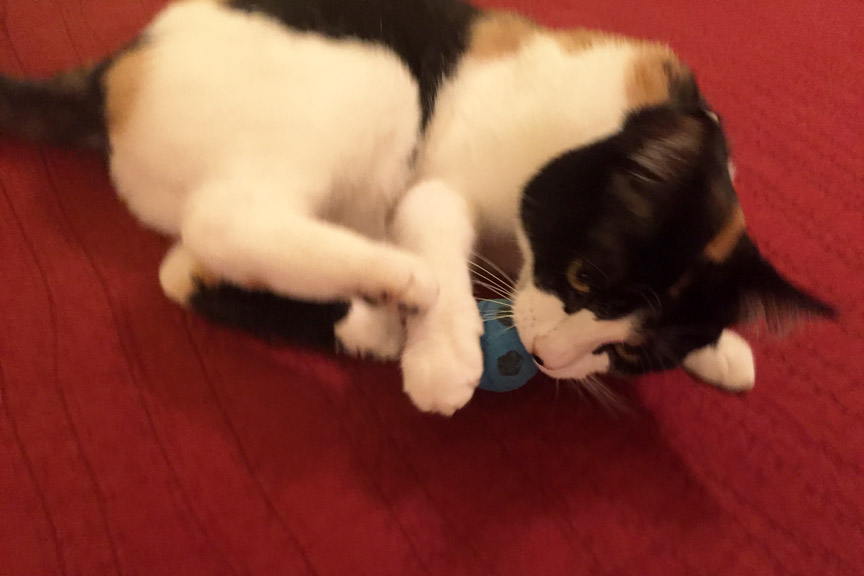 Fast forward to today. It’s been five months with Callie in our home. Somehow this crazy antisocial feline has been possessed by another cat — one that actually enjoys its life.

Of course transitions take time. And I’m sure it was quite traumatic for her to have suddenly lost my mom and her cozy little apartment, and then be transported to a strange house full of new smells, disturbing noises and rambunctious children.

At first I was worried that our unexpected new pet would spend the rest of her life hiding under beds while my joys of pet ownership were limited to regular litterbox cleaning and buying expensive organic cat food formulated to minimize shedding.

Luckily, that’s not how it turned out.

What we actually have is a cat that loves us. Callie has adopted me as her human and whenever I’m sitting, she’s in my lap. She’s affectionate and playful and complains loudly when I have to leave for work. She’s also a good meditation partner. When I meditate, she sits quietly on my lap, purring softly.

Yes, she’s adjusted to her new environment. But I’ve been transformed even more. The resentment and trepidation I first felt have been replaced by love for this sweet animal who has overcome her fears to become a part of our family.

Yep. Callie and I discovered recently that fetch is an awesome game. Check it out…

She still wakes us up occasionally with late-night singing, but mostly she’s an awesome, fun cat.